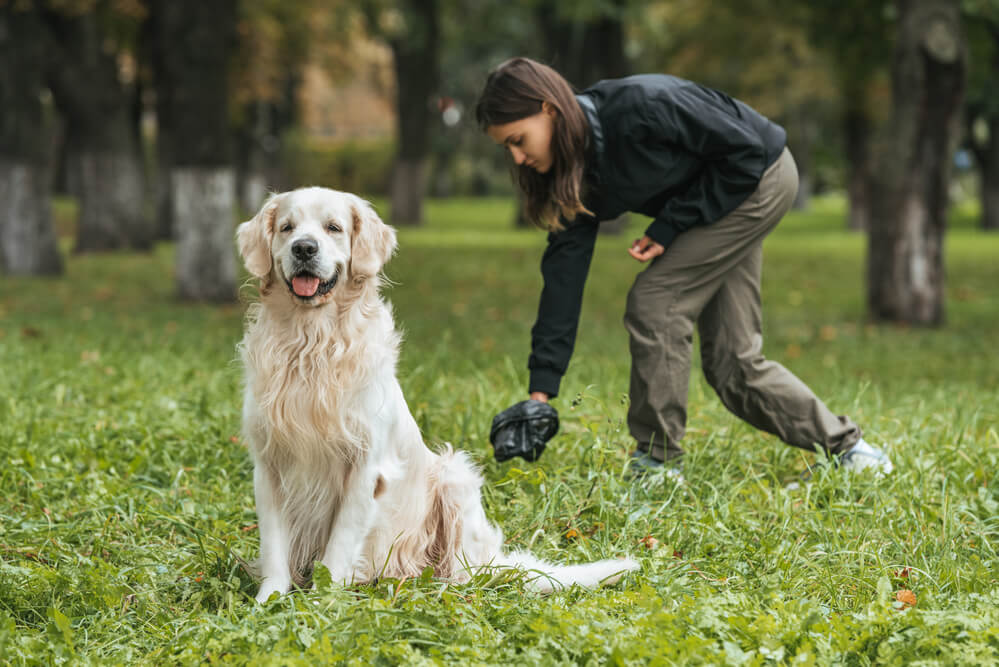 Animals occupy about 18% of the earth’s biomass. Even though they take up a smaller percentage on earth, they produce waste which can cause greenhouse gas emissions.

Microorganisms like bacteria and fungi can consume animal waste, breaking it down into smaller, simpler forms of matter.

Join us in this article as we explore the biodegradable nature of animal waste.

What Is Animal Waste?

The term can also include animal wastes mixed with feed, soil, bedding, or other substances available in such waste.

Animal waste comprises a wide range of products formed when animals metabolize food. It may also include spilled food and water during feeding.

The waste is naturally occurring, making it biodegradable.

When animal waste biodegrades, it forms from organic substances or matter, which can help improve soil quality.

Animal waste can be in the following forms:

Biodegradable items are substances that can get broken into smaller particles by bacteria and fungi.

The process is what we call biodegradation.

A biodegradable substance occurs in organic form, which can decay or rot. Decomposing is breaking down a substance biologically.

Bacteria and fungi that occur naturally facilitate the breaking down of these substances.

The waste often serves as food for microorganisms like fungi and bacteria.

These microbes can digest the waste, breaking it down into smaller molecules that can decompose to form organic fertilizers.

But the organic matter in animal waste depends mainly on:

Once excreted, the manure or organic waste decomposes naturally.

Suspended solids present in the waste get hydrolyzed into dissolved compounds. Biodegradation by microbes then occurs.

The decomposition of organic animal waste may occur if the conditions available are favorable.

It may also depend on:

Animal waste exists in different forms of matter. It can take the form of either solid, liquid, or gas.

Solid waste is from animal droppings when it excretes. It may also have particles from food products the animal consumes.

Biodegradation of animal waste occurs either aerobically or anaerobically:

It’s the process where microorganisms break down organic matter in animal waste in the presence of oxygen.

Aerobic biodegradation produces very little to no emissions as oxygen is in plenty to keep microbes active.

The process occurs where microorganisms break down organic waste without oxygen supply through fermentation.

It is common in animal waste buried underground.

Since there’s no or little oxygen supply, the process generates some amounts of methane gas emissions.

As we know, methane gas is a powerful greenhouse gas with more devastating effects on the environment than carbon dioxide.

Under normal circumstances, animal waste isn’t hazardous as it poses no risks to human health and the environment.

But the waste can be dangerous in the sense that it may be a carrier of diseases and pathogens that can threaten human health.

Burning biogas may also generate significant amounts of methane and carbon dioxide, which can harm the environment.

According to the United States Department of Agriculture (USDA), 200 milking cows produce as much nitrogen as sewage for about 5000-10000 people.

It further says that in the last 20 years, nitrogen production by animals has increased from 0.37 pounds per day to 0.45 pounds per day.

The statistic reflects a 20% increase in nitrogen release by animals.

The United Nations Environmental Program also shows that methane from animal farming accounts for up to 32% of the total methane produced by human beings.

The Guardian writes that in the Netherlands, 80% of farms are producing more cow dung than can get legally used as fertilizer.

However, it can pose a biohazard when produced in large quantities as it occurs industrially.

Such is with the ‘Hog Poop Problem’ in North Carolina in the U.S.

So, is biodegradable animal waste hazardous? Yes, and No. No, because it is easily disposable and decomposes.

Yes, because the bacteria and fungi acting on it produce large amounts of methane gas in large quantities, contributing to climate change effects.

How Can We Manage Biodegradable Animal Waste?

According to the Maryland Department of Agriculture, animal waste management entails handling storage and utilization of waste from animals.

We should safely manage animal waste.

There should be reasonable management procedures to protect human lives and the environment from the risks the waste might cause.

But the best way to do so is by adopting suitable disposal methods for animal waste.

You should use protective clothing disinfectants and do frequent cleaning.

Aerobic biodegradation of animal waste results in a clean environment with minimal emissions.

But if the waste ferments while biodegrading, the process results in methane gas emissions which is harmful to the environment.

That’s why proper animal waste management is one of the best ways to conserve the environment.

All Biodegradable Wastes are Wet Wastes?