Can Rubber Gloves Be Recycled?

In the recent past, rubber gloves have become a staple in many people’s daily lives.

They are a basic requirement in most manufacturing industries and hospitals to prevent contact with harmful chemicals.

Most households use rubber gloves for dishwashing and gardening. As such, we have to deal with the regular disposal of rubber gloves.

This leads us to the question; can rubber gloves be recycled?

The straight answer is YES. Most recycling centers accept rubber gloves for recycling. Rubber gloves are not susceptible to intense contamination.

That’s why they are recyclable. The process involves recycling the rubber gloves and then re-introducing them back into the manufacturing supply chain.

Sit tight to learn more about whether recycling rubber gloves is possible or not.

What Are Rubber Gloves?

Rubber gloves are the type of gloves made from either natural or synthetic latex.

The liquid form is latex, and the end product is rubber.

These gloves get manufactured naturally or synthetically.

During the process, liquid latex changes into a solid form to become rubber to produce the final product.

Rubber gloves are useful when doing household chores such as dishwashing to shield the hands from the harmful effects of hot water and detergents.

They also come in handy when gardening.

They are also common in hospitals and manufacturing industries to prevent contact with harmful chemicals or infectious viruses, bacteria, and germs.

Can You Recycle Rubber Gloves?

Recycling rubber gloves is possible since most recycling centers accept them as they can withstand harsh chemicals and water, and it’s hard to contaminate them easily.

According to World Economic Forum, millions of used gloves get disposed of every day worldwide.

It’s also common that rubber gloves are biodegradable, but does this mean that it’s safe to dump them in landfills or compost pits?

Rubber gloves are mainly used while dealing with chemical substances, which makes it unsafe to throw them in compost pits or landfills due to the adverse effects they can cause to the environment and human health.

Companies such as TerraCycle have come up with ways to make the recycling of rubber gloves manageable and accessible.

What they do is that, if you request, TerraCycle will send you a Zero Waste Box. When the box is full of rubber gloves, you have to send it back to the company.

They will then separate the gloves according to form, melt them, and convert them into new recycled products.

If you are creative enough, there is still another option.

If reusing counts as recycling to you, then there are countless things you can use worn-out rubber gloves for around your home.

For example, since rubber gloves are non-slippery, you can use them to prop up items from falling off.

You can also cut the rubber gloves fingers off so that when you wear them, your hand slips through.

After that, you can then wear them when you want to open tight jars. The list is endless. You have to be creative.

A common question that is usually asked is whether rubber gloves are biodegradable.

The short answer is yes. Rubber gloves are not artificial. The sap found in rubber trees gets extracted from natural sources.

The sap extracted from the tree produces ingredients which can break into compost after a while.

Even though rubber gloves are not 100% rubber and involve some other substances in their manufacture, they can still biodegrade.

Does It Take Long for Rubber Gloves to Decompose?

We already know that rubber gloves biodegrade. But how long does it take for them to decompose?

Rubber gloves don’t just decompose overnight or in a week or month. It takes 5 years to decompose, provided the compost environment is favorable.

There must be moisture and water for the process to occur quickly.

This is evidence that recycling rubber gloves is favorable instead of throwing them into a compost pit because you might not know how long they will take to decompose.

You might try speeding up the process by slicing the rubber gloves into tiny pieces so they can biodegrade faster.

Do Rubber Gloves Have Negative or Positive Impact on The Environment?

Many people, when questioned for an opinion on whether they think rubber gloves are good or bad for the environment, the response is usually affirmative.

This question is tricky because it’s common knowledge that rubber gloves are biodegradable.

It is possible to recycle rubber gloves, but it’s still not common because the largest number of these gloves are used in factories where they come into contact with chemical substances.

For this reason, rubber gloves end up in waste bins and finally in landfills.

Though they will eventually biodegrade, before they do, they will pose a potential danger to the environment in this way.

In case of floods, the debris gets washed into oceans and the nearby lands.

Marine life will consume the waste and die. Same for land animals and plants.

Aside from all that, even if it’s said that rubber gloves consist of 100% rubber, other substances come together in making rubber gloves.

These substances contain toxic chemicals which could be very harmful to the environment and its inhabitants. So even though rubber gloves are biodegradable, how sure are we that the other substances are also biodegradable.

How Do You Dispose of Old Rubber Gloves?

Apart from recycling and composting, the other option is to throw them in the trash.

Rubber gloves don’t negatively affect the environment since their bi-material is from nature.

When dumped in a landfill, it takes a few years for them to break down and decompose.

Knowing the type of gloves and the right way to dispose of them is necessary for protecting the environment.

Rubber gloves are safe for the environment and can get recycled at your local recycling center or naturally.

However, the manufacturing process can only be effective if the right disposal procedure gets followed.

If you choose to use rubber gloves, you must find a safe way to dispose of them. Recycling is one such way. This is safe for the environment and its inhabitants. 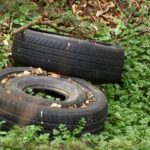 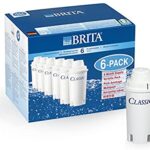